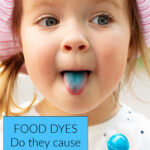 Food dyes and hyperactivity. Does food coloring cause hyperactivity or amplify ADHD? A new report confirms the link between food dye and behavior problems. Here’s what to know.

Like you, we’re always looking for ways to protect our kids – including through their diet.

A common question among parents and caregivers is whether additives like artificial food dyes are problematic for kids. Specifically, many people wonder whether food dyes contribute to hyperactivity and other behavioral issues in children.

A new report from the Environmental Protection Agency says yes. Let’s look at the evidence!

What are food dyes?

Food dyes are chemical substances made from petroleum. They’re designed to enhance the color of certain foods and beverages.

Among the most common food dyes include:

Food dyes are most commonly found in things like candy, popsicles, sports drinks, soda, and juices, ice cream and frosting, cereal, chips, and even vitamin supplements and medications. They’re also found in condiments, like certain brands of ketchup, as well as pickles and pickle relish.

Why are they used?

To make foods look more appealing, of course – including a large portion of the bright and enticing packaged “kid” foods you’ll find on store shelves.

The debate over food dyes and hyperactivity has been going on for over thirty years.

Despite their controversy, the food dyes listed above are considered to be safe by the US Food and Drug Administration (FDA) and the European Food Safety Authority (EFSA), and their use is widespread.

But many people, including the Environmental Protection Agency (EPA), are concerned that food dyes aren’t totally innocuous, and that they may promote hyperactivity and other behavioral issues among children.

After all, the consumption of food dyes has increased significantly over the last five decades as processed, packaged foods have become more of the norm. And the population who ingests the most? Kids.

Initial concern arose in the 1970s, when a pediatric allergist suggested that behavioral problems in kids were being caused by artificial food coloring and other additives. He recommended an elimination diet for kids with ADHD, focused on removing these substances.

There wasn’t research behind his claim at the time but as we know, news travels fast – and many concerned parents helped spread the word.

Additionally, these dyes were approved by the FDA from 1969-1987 before ample research on children was available. Since that time, many clinical trials – including randomized control trials (the gold standard in research) – have been conducted, warranting an updated assessment of their safety.

What the research says

Earlier this year, a report from the California EPA, UC Berkeley, and UC Davis reported that consumption of synthetic food dyes can increase hyperactivity and other neurobehavioral issues for some children.

This systemic review looked mainly at “challenge trials”, where children were put on dye-free diets for several weeks and then exposed to a dye and monitored for changes.

Here’s what they found:

The dose makes the poison

Some argue that the dose makes the poison, and we agree. But the report showed that current intakes of food dyes would exceed safe levels if the FDA updated their acceptable daily intake (ADI) level to reflect more recent studies focused on neurobehavioral effects. They state: “The studies that form the basis of the ADIs, are 35 to almost 70 years old, and as such were not capable of detecting the types of neurobehavioral outcomes assessed in later studies.”

They added that they were unable to identify any biases or other factors that would invalidate their results and that animal research backs up the human data showing that exposure to synthetic food dyes affects activity, memory and learning, and results in changes to brain structure and neurotransmitter systems.

Some older studies on food dyes and behavior have had conflicting results, but this is likely due to small sample sizes and poor study design.

A small clinical trial, including nine kids who went on the elimination diet for 11 weeks, was published in Pediatrics in 1978. Behavior and cognitive performance were “not found to be adversely affected” by dyes.

But other studies since then have found small but noteworthy associations:

Interestingly, some researchers suggest a genetic component that may determine whether a child with ADHD will have exacerbated hyperactivity symptoms from consuming food dyes.

What’s more, some kids may simply be more sensitive to these effects (as noted in the new EPA report), with ADHD or not.

Bottom line: artificial food dyes (and other preservatives) don’t offer any health benefits. So whether they’re problematic for your child or not, there’s no reason to include them in the diet if you don’t have to.

How to avoid food dyes

To know for sure if there are food dyes in your family’s favorite foods is to look at the ingredient list.

Alternatively, look for brands that have opted to enhance the coloring of their products with natural colors instead. Examples include beta carotene, turmeric, and beet extract.

Remember that foods in their most whole, natural forms won’t contribute food dyes and preservatives.

Basing your family’s diet predominantly on whole plant foods, like legumes, grains, nuts, seeds, fruits, and vegetables, is a great approach – for avoiding food dyes, and health in general!

If you’re cooking at home, you can use food and spices to naturally color food.

To make colored frosting, we recommend either using a few drops of water colored with these foods or pulverized freeze-dried fruits.

Is there a link between food dye and behavior problems? Does food coloring cause hyperactivity? It appears so but also depends on your child and their susceptibility. It’s hard to say conclusively, but we feel there is enough evidence to limit exposure, especially if your child is more hyperactive. We recommend reading labels and avoiding purchasing or servings foods on a regular basis that include synthetic food dyes. At the same time, the dose makes the poison. We don’t stress if our kids chow down on a blue Cookie Monster Cupcake at a friend’s birthday party!

Chime In: Have you ever tried to make or use natural food coloring instead of commercial dyes?

If you liked this post, we think you should check out these too: