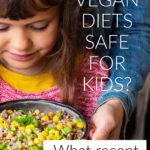 Are vegan diets safe for kids? We’ve always held the position that plant-based diets for kids can be healthy. But recent studies may have you revisiting this question. Is it okay for a child to be vegan? Let’s clear up the safety of vegan diets for kids.

You may have noticed recent articles sparking debate around the adequacy of vegan diets for kids. These often circulate online after new research comes out on the topic.

We’ve always held the position, along with the Academy of Nutrition and Dietetics, the American Academy of Pediatrics, and the Canadian Paediatric Society (among many others), that well-planned plant-based diets are safe and appropriate for all ages.

We also recognize that (very often sensationalized) headlines can make parents of plant-based kids question whether they’re doing something wrong.

And while most existing studies on plant-based diets for kids are on vegetarians, a few recent ones looked at vegans.

At the end of the day, nutrition is a continuously evolving science. Having more data helps us all provide the healthiest diets for our families.

What we know so far

There are several trends that have been observed, and conclusions drawn, from existing research on plant-based diets for kids:

The first study, published in the American Journal of Clinical Nutrition in April 2021, looked at the differences in body composition, cardiovascular risk, and micronutrient status among 187 Polish children ages 5-10 years old who either followed a vegan, vegetarian, or omnivorous diet.

This one stirred up a lot of headlines about vegan children being shorter and having weaker bones. Why? The vegan children were approximately 3 centimeters shorter than omnivores, and had lower bone density.

It’s not really surprising that the vegans in this study had lower bone mineral content (BMC). Only 1/3 of these children were supplementing with vitamin D and their average calcium intake was about 1/3 of the recommended daily allowance (RDA). Vitamin D and calcium are critical for bone development and if these nutrients are not provided in the required amount during years of peak bone accrual, children will not achieve maximal height and bone density.

While the vegans had lower BMC, the difference was non-significant for vegetarians when adjusted for body size. In fact, some research has shown that vegetarians are on average taller than their omnivorous peers. This again suggests that the biggest factor was adequate calcium intake since that would be the main difference between vegan and vegetarian diet patterns.

Interestingly, the authors noted, “The shorter height of children consuming plant-based diets may have mixed implications for long-term health. Taller height is associated with lower risk of non-communicable diseases (e.g., diabetes, heart disease) but also with a greater risk of diverse cancers.”

It’s possible that this is an example of what we call “early metabolic programming” or a “height-disease trade-off.” Meaning, that the same factors that result in increased growth in early life can be detrimental later in life for disease risk.

To note, the height of vegan kids was still in the normal range for their ages in this study, even though they were slightly shorter.

We’d also like to point out that this study excluded children who were overweight or obese, which we believe is a flaw in the study design. Many studies in adults and children have shown that vegan and vegetarian diets result in a decreased risk of obesity, which would affect other health parameters and further highlighted the metabolic benefits of a plant-based diet.

Including children with obesity would also likely have affected the results regarding nutrient deficiencies and intake as overweight and obesity is also linked to poor intake.

Now let’s look at the nutrient intakes of the kids.

(Vitamin B12 has a low absorption rate. We recommend additional supplementation higher than the RDA, which you can find in our free Supplement Guide.)

Additionally, median calcium intake was 376 mg per day. The UK recommends this age group consumes 550 mg per day. In the US, we recommend 1000 mg per day. And while the vegan children consumed less protein, the median intake of 42 grams per day still exceeds protein recommendations.

(We suggest providing kids with fortified non-dairy milk to help meet the 700-1000 mg calcium recommended in the US.)

No kids were found to have severe iron deficiency anemia. But the concerning piece to us is that the vegan children had the highest levels of iron intake, yet low ferritin stores. Usually when iron status is found to be worse in vegans it’s accompanied by poor intake.

The vitamin C intake among vegan kids was also the highest of any of the three groups. This makes the iron results unexpected because as we’ve talked about before, vitamin C boosts iron absorption. We would expect that the children’s high intake of both of these nutrients would result in a lower risk of iron deficiency and higher ferritin levels, but in this case it didn’t.

Some possible explanations are that the vitamin C and iron-rich foods weren’t paired together at the same meal (which is necessary to improve absorption) or that plant-based children simply need more iron total to overcome inhibitors. The Institute of Medicine does recommend that plant-based eaters aim for 1.8 times the RDA for iron, which would mean around 18 mg for children of this age range.

The good news that came out of this study was that vegan kids had better cardiometabolic health biomarkers, including lower total cholesterol, LDL “bad” cholesterol, and hs-CRP (inflammatory marker) compared to omnivores.

This is likely tied to the fact that they consumed less sugar, saturated fat, and cholesterol than the omnivore group while eating more heart-healthy nutrients, like fiber, unsaturated fats, and antioxidants, from whole plant foods.

Plaque build-up, which leads to heart disease, begins in childhood, so diet patterns that can help prevent this early on are essential to preventing chronic disease.

In the end, the researchers didn’t conclude that plant-based diets are unadvised for kids, nor did they recommend adding dairy or meat. Instead, they highlighted the need for adequate supplementation and education.

Which we do, too!

The next study, published in Nutrients in May 2021, is called the VeChi Youth Study, and it showed much more favorable results for vegan children.

There are a few reasons this may be the case. This study included a larger sample size, more specific measurements of food intake, and more plant-based children were supplemented with essential nutrients like vitamin D and B12.

The VeChi Youth Study was a cross-sectional study based in Germany, including approximately 400 children 6–18 years old who followed either vegan, vegetarian, or omnivorous diet patterns.

Some of the same authors also conducted what’s called the VeChi Diet Study among German toddlers aged 1-3 years old, which was published in Nutrients in April of 2019.

The main finding of the toddler study was that a vegan and vegetarian diet could provide the same energy and macronutrients, leading to normal growth, compared to an omnivorous diet. In other words, a vegan diet was found to be adequate for kids’ needs.

But let’s look at what the 2021 study on older vegan kids found.

Overall, the diet quality of vegan kids in this study was very good.

And although this study didn’t discuss bone density, the vegan kids saw normal growth and healthy nutrient intake compared to the other groups. This is likely attributable to the high supplementation rates. Unlike the Polish study, 88% of vegan children in this study were supplemented with B12 and about 1/2 with vitamin D.

Surprisingly, a higher percentage of vegetarian children were found to be likely B12 deficient (13%) compared to vegans (8%) and omnivores (4%). This highlights the fact that all plant-based dieters (even those that consume some animal products) should supplement with vitamin B12.

The authors concluded that “the study confirms a vegan diet can meet the nutrient requirements in childhood and adolescence.”

The VeChi Youth Study had the strength of including a large sample size, of over 400 kids. They also collected a variety of information, including specific measurements using blood and urine tests, weight and height differences, and a 3-day diet history.

The authors also did questionnaires to cross-reference the details of the children’s diet patterns, to make sure they were accurately grouped.

Of course, it also had limitations. Cross-sectional studies don’t tell us how people do over time, as it’s really just a snapshot of data. However, this information is a great foundation for conducting a longer-term study.

Additionally, the vast majority of kids in this study live in larger European cities and belong to a higher socioeconomic status. It’s hard to say whether the findings would apply to lower income communities or areas of more diverse populations.

To draw relatable conclusions from these studies for your own family, it’s important to point out a few things.

In European countries, like Germany, food fortification is not nearly as common as it is in the US. This can make it more difficult to meet RDA for micronutrients.

In the US, we don’t have to be consuming the RDA for nutrients from whole foods alone.

For example, rather than trying to get a child to meet calcium needs from leafy greens and tofu, it’s easy to add calcium from fortified plant milks.

Some milks contain 400 mg of calcium (or more) per cup. If your kids don’t drink them straight, they can easily be used to make smoothies, sauces, or poured over cereal.

Additionally, the VeChi Youth Study didn’t account for use of supplements to help meet nutrient needs, like vitamin B12.

We recommend supplements as a healthy part of a vegan diet. See our Supplement Guide for suggestions.

Are vegan diets safe for kids?

These studies are all a starting point for future research on vegan children. Nonetheless, the data is clear that vegan diets can be a healthy choice for kids.

It’s our responsibility to make sure that nutrients of concern are being provided to our kids, regardless of diet. All diets – not just vegan diets – need to be well-planned.

Every parent wants to ensure that their child enjoys optimal growth and development. If your family chooses to follow a vegan diet, we completely support that.

Plant-based diets for kids that prioritize nutrients of concern, are based primarily on whole foods, and incorporate supplements and fortified foods where appropriate are safe and healthy.

Chime in: What did you think of these studies? Comment below!

If you found this post helpful, we recommend reading these as well: