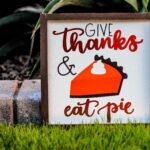 Everyone got their Thanksgiving menus totally planned out and feeling pumped about the situation? It’s okay, neither do we.

The holiday season can be stressful enough as it is – making this year a vegan Thanksgiving doesn’t have to push you over the edge.

Here are some of our favorite ideas for vegan Thanksgiving food that will be enjoyed by all, followed by some of our go-to tips for easily swapping plant-based ingredients for traditional animal-derived ones.

Let’s be honest – nobody eats a giant breakfast and lunch on the day of Thanksgiving. This is one of those graze-all-day holidays where snack foods often make up the majority of the first half of the day.

That doesn’t mean the whole kitchen has to be piled with chips, cookies, and candy all afternoon (but if you’re looking for some healthier plant-based alternatives to sweets for your family, check out this post).

Some of our favorite vegan Thanksgiving snacks include:

If there’s one thing that everyone associated with the Thanksgiving holiday, it’s the turkey. So how do you replace the most popular plate on the table?

Here are some ideas:

We believe the side dishes on the Thanksgiving table are the humble underdogs of the meal, and deserve more attention!

Try a variety of these vegan Thanksgiving sides:

There’s always room for dessert, especially on Thanksgiving. The potential spread of sweets might even be larger when you make them plant-based.

Many of the above ideas are already plant-based, but some simple swaps are all that are needed for the rest.

Instead of dairy milk, use non-dairy milk. We find that plain, unsweetened varieties provide the most neutral flavor and save on added sugar. There are a number of plant-based milks available that have a neutral taste and work well in Thanksgiving recipes, such as soy, almond, oat, cashew, and hemp.

Make flax eggs, which can be used in baked goods. To replace one egg, combine 1 Tablespoon of ground flax seed with 2 Tablespoons of water and let your mixture sit in a small bowl for 5 minutes until it starts to gel. At this point, it’s ready to use!

Try a vegan butter. These are kept in the same cooler as the rest of the butter in many grocery stores, and can be used as a 1:1 replacement for dairy butter.

Use plant-based proteins. These can work really well in places you might normally use turkey or other meat. Beans, lentils, tofu, tempeh, and seitan can all have a place in Thanksgiving dishes based on the desired taste and texture you need. Many of these proteins take on the tastes of things around them, whether you’re using herbs and seasonings, marinades, or sauces.

If you liked this post, check out some of our other recent food and recipe articles:

Chime In: What’s your favorite plant-based holiday recipe? Or if you’re not sure yet, what’s the one you’re planning to make this year?