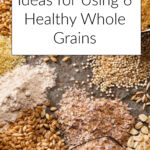 Benefits of grains and how to use whole grains you may have in your pantry. Here are a few ways to use grains in family-friendly meals.

Whole grains are some of the healthiest foods on the planet.

They’re packed with fiber, protein, and an array of micronutrients, like iron, copper, zinc, magnesium, folate, and manganese.

When it comes to grains and kids, rice is often recommended as the first to introduce to new eaters, because of its digestibility, neutral flavor, and lower fiber content.

And while we have nothing against offering rice in your rotation, there are many other grains that can also be offered to your baby once they’re at least 6 months old. You can cook and puree them, or mix them in with rice or baby oat cereal at first if you choose.

Keep in mind that while whole grains are healthy and nutritious, serving sizes for young kids is small because they’re also super filling. Their high fiber content can also lead to constipation for some kids.

We suggest rotating whole grains with a variety of their refined counterparts – like white rice and pasta.

In fact, for kids under 2 years old, we suggest aiming for half and half, whole and refined grains in the diet.

That being said, below are 6 healthy whole grains that you can rotate into your family’s diet, including some ideas for how to prepare them.

Quinoa is a naturally gluten-free pseudocereal (not technically a grain) known for its tiny eyeball-looking seeds, which offer a distinct crunchy texture. It comes in several colors, like white, red, and is even sold in a tri-color blend.

Before cooking, rinse dry quinoa to remove saponins, compounds that can give it a soapy or bitter flavor your baby might not like.

Prepare quinoa using a 1:2 ratio of grains to liquid. Bring water to a boil on the stove and then reduce heat to a simmer until the seeds soften and turn into tiny spirals. Drain excess liquid with a mesh sieve and fluff with a fork before you serve.

Quinoa makes a filling foundation for meals, is a great ingredient for veggie burger patties, and is even a delicious breakfast grain.

Some of our favorite ways to use quinoa include:

Similar to quinoa, amaranth is also a gluten-free pseudocereal However, amaranth seeds are much smaller in size.

Cooked amaranth has an herbal flavor and a nutty or grassy smell to it, which may take some babes time to get used to.

For older kids, you can actually pop amaranth (and quinoa) on the stovetop as if you’re making popcorn. Here’s an easy recipe for how to do it.

To make an amaranth pilaf, combine 1 cup amaranth with 1 1/2 cups water on the stove. If you’re preparing it as a cereal, use 1 cup amaranth and 2 1/2 cups of water. Bring water to a boil, add amaranth, and let it simmer until the liquid disappears.

Barley can be used in place of rice in many dishes.

It comes in two main forms. While barley groats are the whole grain version, pearl barley isn’t considered a whole grain because its outer bran has been removed. Both forms have a nutty flavor and chewy texture when cooked.

Barley works well in barley pilaf, stir-fries, added to soups and stews – like this Bean and Barley Soup – and used to stuff bell peppers or acorn squash before roasting.

Cover 1 cup of pearl barley with 2 cups of water and let simmer on the stove for 30-40 minutes. You can also prepare it in a pressure cooker, using 2 1/2 cups of water per cup of barley.

It’s also sold in a quick-cooking version, which are “instant” or pre-cooked barley flakes that can be prepared per packaging instructions in about 10 minutes.

You may recognize the spherical, yellow grains of millet as a main component of birdseed blends sold here in the United States. But millet is, in fact, a nutritious, gluten-free whole grain with many uses in the kitchen.

It has a sweeter flavor than many other whole grains, which some compare to corn.

To cook millet, use a 1:2 ratio of grain to liquid. You might increase this to a 1:3 ratio for a creamier result. Bring to a boil on the stove and then reduce heat to a simmer until the liquid is gone.

Millet works well in things like Rainbow Millet Salad, as well as added to soups, used as a breakfast porridge, and made into millet patties.

Farro is a high-protein, high-fiber whole grain similar to barley. It contains gluten and has an oblong shape and chewy texture when cooked. Some people even say it has a hint of cinnamon to its flavor.

This grain works well as a base for protein bowls and takes on the flavor of just about any dressing or sauce.

To cook farro, it can be helpful to soak it overnight first. Then, cook it on the stove in a 1:3 ratio of farro to water or vegetable broth. Bring to a boil on the stove and then reduce heat to a simmer until the liquid is gone. You can toss uncooked farro over medium heat in a dry skillet before cooking to enhance its nuttiness.

Here are a few of our tried-and-true recipes for using farro:

While oats are often unfortunately presumed to be a boring breakfast cereal, we’re here to say they have so much more to offer!

We love using oats for breakfast, sure, but in ways that include many delicious flavors and textures. Oats are also perfect for casseroles, homemade bars and snack balls, and even added to smoothies.

Try using oats in some of these new ways:

The benefits of grains are plenty, plus they’re super versatile and delicious. If you’ve been wondering how to use whole grains in rotation with your baby’s more refined options, we think you’ll love these ways to use grains.

Chime In: Does your family enjoy any of these whole grains? Share your favorite uses below!