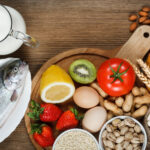 Several of the top 8 allergy foods are animal products, so what does that mean when you’re raising a plant-based family?

If your kids are being raised on a predominantly plant-based diet, presumably this means you’ve made the decision not to regularly incorporate meat, fish, dairy, and eggs into their diet.

However, you might be wondering if it’s a good idea to at least expose your children to some of these foods early on to reduce their risk for developing severe allergies to them later in life — plant-based or not.

Here’s what the research says about if, when, and how to introduce allergenic foods, and some of our thoughts on the topic.

What Is a Food Allergy?

Food allergies are an immune response in which the body attacks a food protein by mistake, thinking it’s a foreign invader or threat.

Allergies can cause symptoms like swelling around the mouth, face, or throat, itchiness, difficulty breathing, and gastrointestinal effects like nausea, vomiting, and diarrhea. In severe cases, food allergies can be life-threatening.

A food allergy is different from a food intolerance, in that the latter does not cause an immune reaction in the body and isn’t life-threatening.

For instance, a child with a severe milk allergy cannot consume milk or milk-containing products, whereas a child with lactose intolerance could presumably have small amounts of milk depending on how much digestive upset it caused.

An estimated 4-6% of children and 4% of adults suffer from food allergies. Such allergies affect people uniquely, meaning that one child may have a severe reaction to an allergen while another child is only mildly reactive to it.

Some research also suggests that kids with family members who have a history of sensitive conditions like eczema, asthma, or allergic rhinitis may also have a higher risk for food allergies.

Infants who are breastfed exclusively for the first six months of life have a lower risk for sensitive conditions like eczema, and likely other immune response conditions like food allergies.

Some children will outgrow food allergies and sensitivities by the time they turn five years old, but not all. Allergies to peanuts, tree nuts, fish, and shellfish tend to last longer – often for life.

If you’re concerned about your child’s risk for food allergies, it’s best to discuss this with your pediatrician. They will also be able to refer you to an allergy specialist if needed, and provide guidance around whether allergy testing is appropriate or necessary.

What Are the Most Common Food Allergies?

Most of us are familiar with peanut and tree nut allergies, but these aren’t the only ones.

Below are the top 8 most common allergenic foods:

The above 8 foods account for approximately 90% of all food allergies, while the other 10% are other foods including emerging allergenic foods like sesame seeds and mustard seeds.

How to Introduce Allergy Foods to Babies

Old recommendations were to keep your children away from common food allergens until they were at least 1-3 years of age.

Specifically, it was to wait to introduce cow’s milk until 1 year, eggs until 2 years, and nuts and fish until 3 years.

The thinking behind this was that a child’s immune system is going through some massive development during this time, and to wait until it was stronger to introduce potentially reactive foods. Basically, delaying introduction was thought to be protective.

These recommendations have since changed, and continue to be updated based on emerging science.

In fact, the general consensus today is that waiting to introduce allergenic foods to kids until they’re older can actually increase their risk of developing food allergies.

These foods can be incorporated with other first foods for babies, as long as they are age appropriate in terms of texture and consistency.

New recommendations for introducing peanuts are largely based on the results from the The Learning Early About Peanut (LEAP) study, conducted among infants in the UK, which found that earlier introduction was beneficial for preventing peanut allergies.

Other research reports similar findings. One 2018 study on the topic of peanut allergies concluded that early introduction to peanuts actually lowers peanut allergy risk in high-risk infants from 17.2% to 3.2% at 5 years.

To introduce peanuts to your child, Massachusetts General Hospital recommends giving your baby a first taste, waiting 10 minutes for a reaction, and repeating with a second taste.

After that, let your baby finish the peanut butter serving at a normal speed. Watch for any reactions over a period of around two hours, as this is the window of time in which most adverse food reactions will occur.

From there, expose your baby to at least 2 teaspoons of peanut butter three times per week.

In 2017, the National Institute for Allergy and Infectious Disease introduced a guideline for introducing peanuts which is very similar.

Earlier exposure to eggs also appears to be beneficial for infants.

The PETIT trial exposed Japanese infants 4-5 months old with eczema to daily egg powder or a placebo, finding that those exposed to eggs had a 78% lower risk of developing an egg allergy in the first year of their life. That’s huge!

Although there’s no standardized guideline for introducing other allergenic foods to babies, research suggests it’s likely that others could be introduced in the same way – especially if it’s a food you are particularly concerned about or your baby is at high-risk for allergies.

Here are some ways you could introduce some of the other common allergy foods to your child:

Introducing animal-derived food allergens to children on a plant-based diet can raise some ethical considerations, which is something that your family will have to determine whether and how to pursue.

While we can’t make that decision for you, we personally introduced the top 8 allergens to our children, with the professional perspective that it will help protect them from developing potentially severe food allergies later on.

That being said, introducing animal-derived allergenic foods to your baby doesn’t mean that you have to make animal products a part of their long-term diet if you don’t want to.

Introducing allergenic foods to babies can sound scary, but understanding current recommendations and consulting with your pediatrician can help make it easier. You may even be able to lower your child’s risk of developing a food allergy, even if your child is being raised on a predominantly plant-based diet.

Chime In: What are your thoughts on introducing allergenic foods to your littles? Have you approached this topic in your household?

If you liked this article, check out some of these other ones: