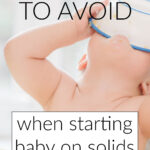 Foods to avoid when starting solids for your baby. What foods do you introduce to baby first, and which should be excluded? Here are some basics around weaning nutrition, including what solid foods to start baby on.

We both remember Googling many questions around how to wean our kids from breast milk and introduce them to solids. We were both interested in doing baby-led weaning, but having never done it before, weren’t sure what foods got the green (or red) light.

So, we know that many other parents out there probably have the same questions. And let’s get one thing straight from the get-go: there’s no one “best” way to introduce solids.

Understanding which foods are best avoided in the beginning is a helpful tool as you figure out your plan.

Whether you’ve breastfed, formula-fed, or done a combination of both, your baby will start to tell you when he’s ready to try some solid foods.

While there’s some wiggle room for when to start, there’s no benefit to starting solids before 4 months of age, and this may actually come with potential health risks.

When planning your babe’s menu, we want to expose them to as many foods, textures, and flavors as possible to help them develop a widely varied palate.

However, it’s important to avoid foods that have a higher risk for choking.

First foods should be soft enough for baby to eat with her gums. To test consistency, smash a bit of the food you’re planning to offer between your thumb and forefinger.

Regardless of whether you’re choosing to do baby-led weaning or spoon-feeding, there are certain foods that should be avoided between 6-12 months.

Foods to avoid when starting solids

We realize this this is a long list of foods to avoid when starting solids for your baby. But it still leaves plenty of delicious, nutrient-rich foods you CAN offer baby! It may be helpful to print and hang this list in your kitchen as you decide what solid foods to start baby on.

Chime In: What first foods has your baby loved so far?

If you found this post helpful, here is some other recommended reading: