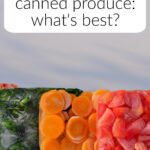 Fresh, frozen, or canned produce? Which should you choose? Nutrition differences and best uses for each type, plus what to look for when using frozen and canned produce.

Nothing really beats the taste of fresh watermelon and berries in the summertime or roasted fresh broccoli right out of the oven.

But when fresh produce isn’t available, are canned or frozen okay?

Here’s the low-down on the differences between fresh, frozen, and canned produce.

Fresh, Frozen, or Canned: Which is Best?

While frozen and canned fruits and veggies often get a lesser-than rep, it’s not deserved.

Yes, there are instances where certain types may not be as healthy as others, but overall there’s no reason why canned and frozen produce shouldn’t be a part of your diet.

Let’s look at some of the differences between fresh, frozen, and canned produce.

While it’s certainly true that you’ll get a ton of nutrition from biting into a fresh apple or carrot, there are actually some instances in which frozen or canned produce might have more to offer.

For example, canned tomatoes are prepared using a heat process that releases and helps preserve a health-protective antioxidant called lycopene.

Frozen peas are frozen quickly after harvest, at their peak ripeness and nutrition. Otherwise, the sugar in peas starts turning into starch when they’re picked.

This process happens quickly and within just one day, the natural sweetness of peas can be replaced by dullness.

Fresh spinach may not bean frozen spinach in the nutrition department, either. If you’ve ever cooked fresh spinach leaves on the stovetop, you’re familiar with how much they can shrink in size.

That means a serving of frozen spinach can contain way more spinach – and nutrients – than a handful or two of fresh.

Another example is lemon and lime juice. While these aren’t exactly canned or frozen, some of the bottled versions do contain additives like sugar or citric acid that you won’t find when you squeeze the juice right from the real thing.

Fresh, frozen, and canned produce can all have multiple uses. But there are some ways that each may turn out the best.

When you thaw frozen produce it can get mushy. You’ll probably want to opt for fresh when you’re preparing a pan of roasted Brussels sprouts and cauliflower, or serving veggies with dip.

Fresh fruit is also better for eating on its own, or for any instance when you want it to have a little more crunch.

Overall, our recommendation is to eat fruits and vegetables, period.

If that looks like seasonal fresh produce, canned, frozen – or a mix of all three – great! There’s a benefit and use for all of them.

Look for no-sugar-added canned fruits, no-salt-added canned veggies, and frozen produce without added butter, sugar, or sauces, for the most nutritional benefit.

Chime In: Does your family have a preference for using fresh, frozen, or canned produce, or do you rotate various types? How do you prefer to use them?

If you found this post helpful, we think you should read these too: