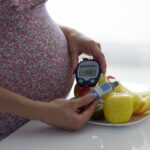 Now that we’ve both been through two predominantly plant-based pregnancies, we love answering some of the most frequently asked questions around pregnancy-related conditions.

We’ve been asked a lot about gestational diabetes and whether a high carbohydrate plant-based diet affects one’s risk or management of the condition.

Unfortunately, much of the confusion around this topic has been perpetuated by the low-carb community. So, let’s clear it up.

What is Gestational Diabetes?

Gestational diabetes (GD) is usually diagnosed during weeks 24-28 of the second trimester in women who didn’t have diabetes prior to becoming pregnant.

It affects approximately 10% of pregnancies worldwide and can lead to an increased risk for pregnancy complications like high blood pressure and macrosomia, where babies gain too much weight for their gestational age.

Large babies increase the risk of complication during birth and put children at a future risk of health problems like obesity and diabetes.

While gestational diabetes usually resolves after birth, about half of moms will go on to develop type 2 diabetes.

For many women, GD is unavoidable.

Pregnancy is a naturally insulin-resistant state for the body to be in.

The body’s ability to respond to insulin and uptake glucose is inhibited in order to divert nutrients to the developing baby instead of mom.

Unfortunately for some women, insulin resistance is simply increased too much, resulting in dangerously high blood sugar levels.

Risk factors for developing GD include age, ethnicity, weight, and a family history of diabetes.

How to Reduce Your Risk for Gestational Diabetes

While GD is very common, there are things you can do to reduce your risk for developing it in your pregnancy.

One of these is to eat a plant-based diet.

We understand that, depending on what you’ve heard, this may seem counterintuitive given the fact that plant foods are naturally high in carbohydrates – otherwise known as glucose – which raises blood sugar levels.

But here’s the thing.

Research actually shows that a high-carb diet reduces the risk for GD and results in better glucose management for those women who have the condition.

What the Research Says

One randomized controlled trial – the gold standard in research – assigned women with GD to a high-carb diet or a low-carb diet with the same amount of calories for 7 weeks.

The high-carb group ended up reducing their fasting blood glucose levels – how high your blood sugar is after sleeping for a night or not eating for at least 8 hours – and free fatty acids… while the low-carb dieters saw increased glucose levels!

Additionally, the high-carb group had reduced markers of inflammation in their fatty tissue compared to the low-carb group.

How do you explain this?

Well, researchers think that the increased fat intake of low-carb diets – specifically saturated fat found in animal products like meat, eggs, and dairy – increases insulin resistance by impairing the functioning of insulin receptors and increasing inflammation throughout the body.

Fiber is only found in carbohydrate-rich plant foods. Animal products offer no fiber.

So in other words, by cutting out carbs from your diet, you cut out fiber as well.

One study found that every 10 grams of fiber per day increase in one’s diet resulted in a 26% reduced risk of GD.

What’s even more interesting in that the same study found increases of just 5 grams of fiber from grains or fruit specifically – two often unfairly demonized food groups – GD risk was reduced by 23 and 26%, respectively.

So basically, everything you ever heard about high-carb diets causing GD or cutting out carbs to treat GD is total BS.

In fact, there’s no universally agreed upon diet to treat GD whatsoever.

Large systematic reviews have determined that any dietary intervention is better than none, but haven’t really fleshed out the specifics around what they might look like.

What We Do Know

Despite the uncertainty around standard dietary practices for GD prevention and management, we know that fiber is good.

So rather than restricting carbs, the focus should be on selecting the best sources of carbohydrates – those that are HIGH in fiber.

This includes all the foods found in a whole foods plant-based diet:

And what foods should we minimize?

Additionally, despite recommendations for pregnancy women to load up on protein and red meat, high intake of animal protein has also been associated with a higher risk for GD.

That being said, we’re not here to shame anyone.

We advocate for a predominantly plant-based diet. That means, the more plants the better.

If that means following a vegan or vegetarian eating pattern for you, that’s awesome.

If it means simply reducing your meat and animal product intake, that’s great too.

Every bit of plant-based eating is beneficial!

So to sum it all up, to reduce your risk of gestational diabetes and help better manage the condition if you do get it:

Don’t skimp on the high-quality carbs. Simply focus on eating as many fiber-rich plant foods as possible.

While it’s still possible to get gestational diabetes while vegan, research shows that a plant-based diet can reduce your risk. A plant-based pregnancy that incorporates high fiber carb-rich foods can help prevent and manage this condition.

For more info on prenatal nutrition, be sure to check out the Plant Based Juniors Predominantly Plant-Based Pregnancy Guide.

Chime In: Have you ever experienced gestational diabetes? What was the experience like for you?

If you found this post helpful, we recommend you check out some of these too: