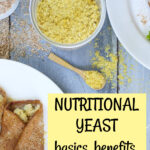 There was a time when nutritional yeast was like an exclusive secret of the vegan community. But today, it’s gone much more mainstream with the rest of the plant-based food market.

In fact, you’ve probably seen nutritional yeast in your favorite grocery store, no longer hidden in the corner but mixed in with the condiments or baking ingredients.

If you’re curious about adding nutritional yeast to your family’s meals, or wondering whether it’s good for kids, this post is for you!

What is Nutritional Yeast?

While S. cerevisiae is also the kind of yeast used to make bread and beer, nutritional yeast is an inactivated version. In other words, you’re not going to be making a loaf of sourdough with it.

Instead, nutritional yeast is used as a seasoning and flavoring agent.

When you purchase it, it generally comes in a shaker, a plastic container, or a bag.

It has a slight resemblance to the thin flakes you used to feed your pet goldfish as a kid, with a much more pleasant odor.

Nutritional yeast is yellowish-tan and has a nutty or cheesy taste.

When you get it home, nutritional yeast stores best in cool, dark places. We often keep ours in the refrigerator to extend shelf life.

In addition to the cheesy, nutty flavor nutritional yeast brings to soups, sauces, casseroles, and other dishes, it also offers a number of health benefits.

One of the main reasons so many people in the plant-based community love nutritional yeast is because — when fortified — it’s a great source of vitamin B12, among other B vitamins. It also contains fiber, protein, and a little bit of iron.

You’ll also find some trace minerals in nutritional yeast, like zinc and magnesium.

Note that there are also unfortified versions of nutritional yeast. These will only contain the vitamins and minerals that are naturally occurring in the yeast, without the added benefit of extra B vitamins, like B12, that you’ll get in fortified varieties.

And, while nutritional yeast is a great source of vitamin B12, we still recommend that plant-based families use a B12 supplement to make sure needs are met.

Nutritional yeast is also a good source of antioxidants.

Just like antioxidants found in colorful fruits and veggies, those in nutritional yeast offer some protection against cellular damage. This can help reduce the risk of chronic disease.

Another compound in nutritional yeast, called beta-glucan, may help support the immune system. Some studies have found that beta-glucan is active in the gut microbiome.

Anything we can do to support our family’s gut health is important, as this also translates to better overall health.

Who Shouldn’t Use Nutritional Yeast?

Nutritional yeast is a safe and nutrient-rich food for most people, including kids.

But there are certain groups that may need to avoid nutritional yeast or choose unfortified varieties.

First, if your baby has an MTHFR genetic mutation, we would recommend using unfortified nutritional yeast.

This is because fortified versions have had folic acid, the synthetic version of vitamin B9, added to them. Having the MTHFR mutation causes an impaired folic acid metabolism.

Kids who have a yeast allergy may also want to avoid nutritional yeast, just to err on the side of caution.

For more considerations around nutritional yeast and babies, see this post.

How to Use Nutritional Yeast for Kids

So what are some ways to offer nutritional yeast for kids? Here are some of our favorites!

Chime In: Does your family use nutritional yeast? What are some of your kids’ favorite ways to eat it?

If you liked this post, we think you should read some of these as well: